Hotel Cafe Royal on Regent Street is today a five star hotel nestled between the elegance of Mayfair and the creativity of Soho, but the history of the cafe dates back to 1863 when a French wine merchant called Daniel Nicholas Thévenon arrived in England to escape creditors in Paris . Within a couple of years he established the Café Royal which was set to become one of the places to see and be seen at in London.

By the end of the century it was renowned as a truly remarkable and original establishment with what was considered at one point to have the greatest wine cellar in the world. Frequented by writers and artists and Oscar Wilde, Arthur Conan Doyle, H G Wells, George Bernard Shaw, Rudyard Kipling, W B Yeats, were all patrons. Distinguished figures such as Winston Churchill, D H Lawrence and Virginia Woolf were also often seen at the cafe.

Today as I said it is a luxury hotel with the beautiful Cafe Royal facing Regent Street, a brasserie and a luxury spa with swimming pool.

The former Grill Room has been restored to its authentic and opulent Louis XVI detailing and renamed the Oscar Wilde Bar. It is now the place to enjoy afernoon tea during the day and Champagne and sparkling wine in the evening. A programme of live music is there to add further atmosphere to this unique space.

Last month I was invited to the Oscar Wilde bar to review their London Royal Tea service, which takes place daily, every hour from 12pm to 5pm. It’s quite a decadent and beautiful affair, definitely not the place to walk in with your jeans and trainers for a quick tea break. In fact, there is a dress code and gentlemen are required to wear a jacket.

Flicking through the menu I read all about “tea etiquette” and the story of afternoon tea. The ritual was conceived in in 1841 by Anna Maria, the wife of the seventh Duke of Bedford: she would complement an afternoon cup of tea with a bite to eat and invite guests to join her. By the 1860’s the idea of afternoon tea had become a popular occasion.

Invitations to afternoon tea were formal, often engraved or written by calligraphy, and they were extended to two pourers. It was an honour to be asked to pour tea as they were regarded as the guardian of the teapot, implying social graces and profound trust. A silver tray was required together with a tea service consisting of teapot, a creamer for the milk, sugar bowl, a pitcher of hot water and a plate for lemon slices.

The tea etiquette has further instructions, for example on how to hold cups and saucers, how to stir a cup of tea, how to prevent tea from spilling in your saucer and how to unfold the napkin (the waiter is trained to place the napkin on a guest lap).

It’s all very fascinating to someone like who didn’t grow up with such old and fancy traditions, so for me having afternoon tea is still – everytime – a wonderful experience. Even more so in such spectacular settings as the Oscar Wilde Bar.

My friend and I started the afternoon tea with a Champagne cocktail, mine was the fabulous Ziggy Stardust with coconut noire tea, coconut, Veuve Clicquot Rich Champagne. Wondering where the name comes from? The history of Cafe Royal isn’t just rooted in the 19th century. The cafe was a popular hangout in the 70’s and in 1973 David Bowie famously retired his alter ego, Ziggy Stardust with a star studded party, dubbed ‘The Last Supper’.

Afternoon Tea traditionally starts with a savoury sandwich selection. The sandwiches here were a mix of finger sandwiches, buns, savoury biscuits and mini sausage rolls. They were a bit hit and miss, some delicious, others not my taste. I like traditional finger sandwiches with classic fillings of cucumber cream cheese, egg mayo or salmon.

Then we moved onto the scones: small and smooth, offered with a choice of plain or with raisins, these scones with clotted cream and strawberry preserve were perfect.

Finally, the cakes were served, all inspired by London and the Royal family, and made with traditional red and blue colours: Battenberg, the “London Underground” macaroon, Pearly King and Queen Opera; Spitfire Lollipop; Raspberry Regent; Victoria Sponge.

The chocolate lollipop, the battenberg and the chocolate layered cake were my favourites. The Victoria sponge and the macaroon didn’t impress me as much.

By that point a few hours had passed, we had drank two teapots of tea and stuffed ourselves with sandwiches and scones. I tasted one or two cakes, but took away most of them in an irresistibly cute “doggy bag”, to eat at home the next day.

The only problem with the Oscar Wilde Bar is that you are completely hidden away from outside world, so you can easily lose track of time and spend the whole afternoon sipping Champagne and eating cake. Maybe that’s not a bad thing after all! ;)

Disclaimer: I was a guest of the Hotel Cafe Royal. All opinions are my own. 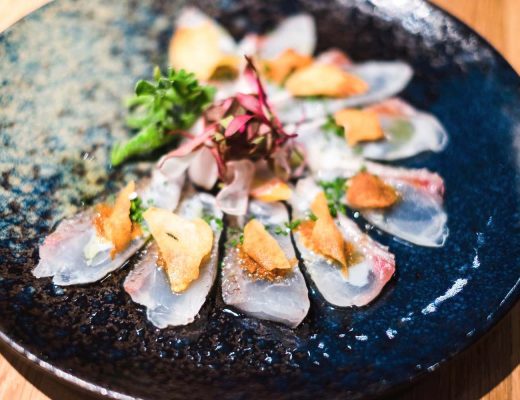 The Sunflower Cocktail with Elderflower and Passion Fruit

Have you ever mixed cocktails at home? I love hosting dinner parties, but when I do, I always leave the...