This Spring/Summer the Victoria & Albert Museum in London is running an exhibition celebrating the extraordinary creative talent of one of the most innovative designers of recent times: Alexander McQueen. After visiting Savage Beauty at the museum, you can continue your immersion into McQueen’s world with Afternoon Tea at nearby The Kensington Hotel.

The Kensington Hotel is an elegant hotel situated at the corner of Queen’s Gate and the Old Brompton Road, in a beautiful 19th Century townhouse with white façade and columns.

The decor inside the hotel varies in colours and furniture styles between the different dining rooms, all maintaining an elegance and coziness that make this hotel a wonderful location for a few nights in the city.

I was invited by The Kensington Hotel last month to try their new Afternoon Tea menu and afterwards I had the opportunity to visit Savage Beauty at the V&A.

The first and largest retrospective of the late designer’s work to be presented in Europe, Alexander McQueen: Savage Beauty showcases McQueen’s visionary body of work. Spanning his 1992 MA graduate collection to his unfinished A/W 2010 collection, McQueen’s designs are presented with the dramatic staging and sense of spectacle synonymous with his runway shows.

The exhibition was spectacular and curated in every detail by the talented V&A team. I urge anyone who is in London to go see it before it ends on 2nd of August. Tickets are released daily at the ticket office, so go directly to the museum and try your luck.

Back at The Kensington Hotel, I had a delicious afternoon tea with a glass of Champagne followed by a few cups of Ceylon tea.

While I always love the sandwiches and scones in an afternoon tea, the highlights for me are always the cakes. The chefs at The Kensington Hotel were inspired by McQueen’s iconic creations displayed at the Savage Beauty exhibition to create beautiful pastries and cakes: buttermilk pannacotta with raspberry, a marzipan sable, raspberry & red pepper macaroon, cherry Genoese skull clutch and a red velvet and rose water butterfly cake.

The marzipan cake with the little skull was my favourite cake, in taste and look. Before visiting the exhibition, I would have said skulls were the most iconic designs of McQueen’s designs, although know I wouldn’t be able to pick one. All of his creations are unique and amazing – a true work of art worth being exhibited in a museum such as the Victoria & Albert!

Disclaimer: I was a guest of the hotel for the afternoon tea and exhibition. All opinions are my own. 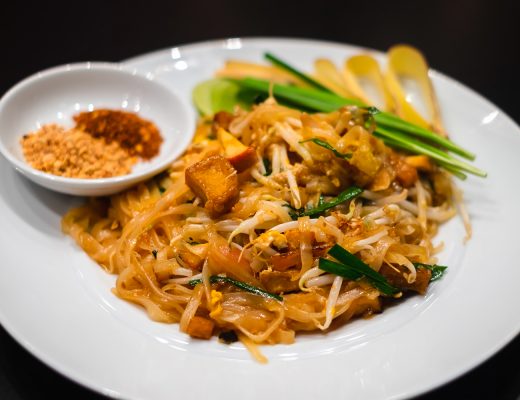 Bangkok: A Four-Day City Guide to The Thai Capital

Top 10 Things to See/Do On Harmony of the Seas

My First Time in Borneo, Malaysia to Discover Sarawak

Until a few months ago I had never heard of Sarawak - one of the two Malaysian states of Borneo....