A Three-Day Guide to Lanzarote in Canary Islands

Hands up if you always thought Lanzarote was a destination for families, old people and packaged holidays. If you thought that, think again because you are probably going to love Lanzarote. It’s a vibrant place, full of natural and architectural beauty, fantastic food, a relaxed vibe and warm weather all-year round. I recently spent three days in the Spanish island and I can tell you why you should visit Lanzarote this year.

I was in Lanzarote on a press trip with nine other bloggers from the UK. We flew to Lanzarote from Birmingham International, which is 1 hour away by train from Euston station. The flight was smooth and comfortable, and 4 hours later with landed on the Spanish island in the Atlantic ocean. I was pleased to discover that there is no time difference between the UK and Canary Islands!

A Three-Day Guide to Lanzarote in Canary Islands

In Lanzarote we stayed at Hotel Aequora Lanzarote Suites, a resort with large private apartments and all inclusive food, just a few minutes from the sandy beach of Playa de los Pocillos (Puerto del Carmen).

The weather didn’t always play along and we had a few isolated showers and some strong winds, enough to cancel our plans of scuba diving. Lanzarote has a subtropical climate with warm temperatures, low rainfall and endless sunshine throughout the year so I guess we were just really unlucky. I didn’t mind not spending time by the pool though, as we had plenty of things to do and see. And when the sun did come out, it was absolutely glorious!

We kicked off with a visit of Timanfaya National Park, the “fire mountains” created between 1730 and 1736 when more than 100 volcanoes rose up and devastated this part of the island. The colour contrast of blue sky, red mountains and black volcanic soil was absolutely beautiful – one that you will find a lot around Lanzarote – but nowhere else it looks as stunning as in Timanfaya. It reminded me of the volcanic landscapes of Iceland, albeit here the colours are warmer and the scenery is less harsh and rugged.

Because of the vastness of the national park, of the hazardous grounds and the fact that underneath the surface the area is still hot, it is not possible to wander freely around the volcano, you have to be inside of a tour coach. It is a bit of a shame, but given the fact that Timanfaya is an active volcano, it is quite understandable.

After the park we drove to the coastal town of El Golfo where we had a fabulous lunch at Casa Torana.

I recommend this restaurant for the fresh seafood, local dishes such as Canarian potatoes, and paella. Service was great and the view from the terrace was breathtaking.

Still full from lunch and feeling light-headed from the sunshine and possible from the shots of honey rum, we made a quick visit to El Lago Verde, an emerald green lake situated at the base of a spectacular crater.

Afterwards we hopped on our private bus to go to the Salinas de Janubio, the only operating commercial salt works on the island.

There is a lovely restaurant called Mirador de las Salinas where we ate great Spanish food and watched the sunset.

Our second day in Lanzarote started with a visit to Cava de los Verdes (about one hour drive from our resort). The cave is a one-kilometre lava tunnel which was formed about 4,000 years ago when the Montaña La Corona volcano erupted. It forms one of the longest volcanic galleries in the world and it is absolutely amazing to see, even if you are not a fan of caves. Trust me, this is definitely worth your time. The cave continues all the way under the sea and there is also another section open to tourists at Jameos del Agua.

Our next stop was probably my favourite spot in the whole of Lanzarote: Mirador del Rio.

The viewpoint is 479 metres high and located in the north-west of Lanzarote, at the end of the Risco de Famara range. The late Lanzarote artist Cesar Manrique designed the mirador as a soft, rounded white building integrated in the lava rock, in his famous architectural style. There is a cafe, a small shop and a roof terrace with fantastic views of the Graciosa island.

After the long morning of sightseeing I was in need of a good lunch. Luckily our next and last stop for the day was Bodegas Rubicon, where we had a taste of delicious tapas paired with Rubicon wines.

After lunch we had a tour of the vineyard and cellar and I learnt a lot about Lanzarote’s volcanic wines. La Geria, where Bodegas Rubicon is situated, used to be a rich and fertile land for agriculture until several volcanic eruptions (1730-1736) devastated the fields. The land, still covered with ashes, became fertile again after a few years. It was discovered that the volcanic ash could retain the moisture of the water accumulated at night or after the rain, so this made the soil of La Geria particularly good for growing vines.

As opposed to traditional vineyards where the plants grow next to each other in rows, in Lanzarote a single vine is planted in one spot and is protected from the strong winds by a semi-circular wall made of lava rocks.

As a result, the production of wine in Lanzarote is very small (1500-2000kg of grapes per hectare and just 2 million bottles per year). It’s definitely worth buying a bottle if you find it in your local wine shop.

At Bodegas Rubicon they make some really lovely wines , such as the Malvasia Seco white wine and Listán Negro red wine.

Our last full day in Lanzarote was supposed to start with a scuba diving lesson at Playa de los Pocillos, which sadly was cancelled because of the strong wind. Myself and a couple of other people decided to go to Teguise, a small town in the centre of Lanzarote island.

Teguise is famous for its Sunday market, the island’s biggest and oldest open-air market. The town was easy to reach by bus from Playa del Carmen and it was a nice place to spend the morning.

In the afternoon we drove to Taro de Tahiche (approximately 30′ from Playa del Carmen) to visit the César Manrique Foundation, the former studio-home of the famous artist and architect. The house was built on the site of the Lanzarote eruptions in the 18th century and the black lava rocks are visible not only around the house but also in the building itself. The design is marvellous and so are the paintings displayed inside the gallery. It is definitely a must-see in Lanzarote.

What I love about Lanzarote is that all the houses and buildings are in the traditional colours: white, often with emerald green or bright blue doors and windows. That’s also thanks to Cesar Manrique. He had a major influence on the planning regulations in Lanzarote, as well as in opposing the construction of high rise hotels which would have disrupted the natural scenery.

Our next and final stop was Caleta de Famara, one of the best sandy spots on Lanzarote and very popular among surfers.

The town is pretty in a classic Lanzarote way: all white buildings and green or blue frames. It seemed empty and a little sleepy, possibly because it was still low season.

We had drinks and tapas on a restaurant’s terrace overlooking the sea, moving indoors in the evening for a dinner of paella and lobster stew. Myself and a few other bloggers ventured out to the beach to take photos of the stormy ocean (I got soaked to my knees and almost lost a memory card in the process).

Sunset lasted for about five minutes and I literally dashed out of the restaurant with my mouth still full of paella, and so I managed to take a picture of the pink cloud appearing behind the mountain. What a beautiful show!

I really fell in love with Lanzarote and I am definitely going back!

Disclaimer: I was invited to Lanzarote as part of a blogger trip. All opinions are my own.

Did you like this post? You are going to love reading about my holiday in Formentera and my Gran Canaria guide. 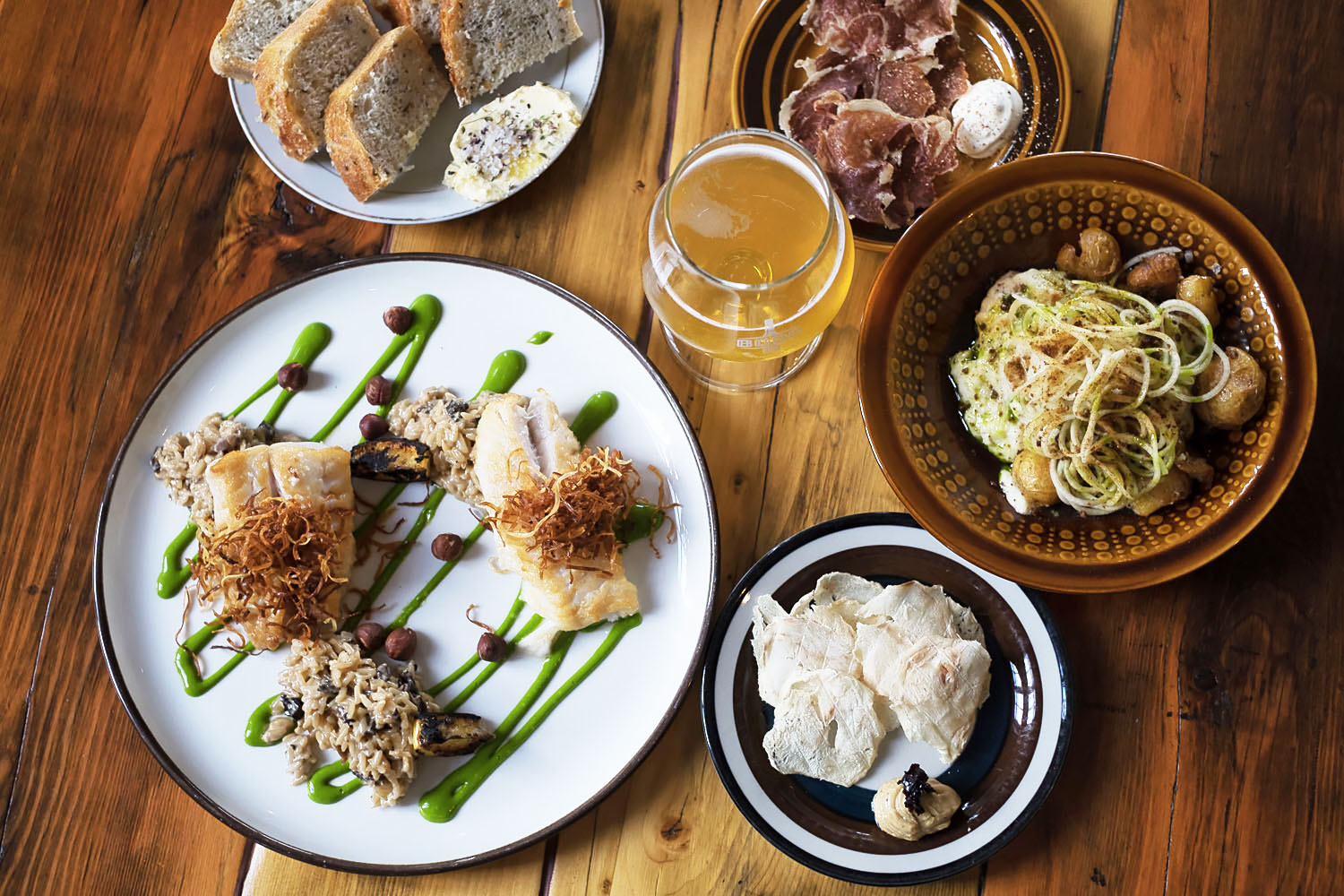 An Introduction to Iceland and Icelandic Cuisine

You can take the Italian out of Italy, but... she

Spending my days dealing with tenants and estate a

Top 10 Things to See/Do On Harmony of the Seas

Harmony of the Seas, the world's largest cruise ship and the 25th ship in the Royal Caribbean fleet, departed from...