There is nothing worst than having a holiday ruined by a bad meal. And yet, it is all too easy to fall into tourist traps when travelling. We’ve all been there! That’s why I always try to join a local food tour whenever I travel to new and unfamiliar destinations. One of the best food tours I’ve ever done was with Devour Rome and I think you would love it too! Here’s all about my experience.

The Testaccio Neighbourhood in Rome

When I was 19 years old and I lived in Rome, I finally got my driving licence and a car and literally my world changed. Suddenly, I was no longer confined to the suburbs I lived in, but I could explore Rome and all its diverse and beautiful parts.

One area that me and my friends kept going back to was the cool, sometimes rough, and quintessentially Roman neighbourhood of Testaccio.

Once home to the largest slaughterhouse in Europe, Testaccio today is home to a diverse population of young and old people. It has a large food market, a contemporary art museum, traditional restaurants, popular bars & clubs.

Testaccio is nestled between EUR, Ostiense, the Aventino and the river Tiber. If you’re in Trastevere, you can easily walk to Testaccio in about 20-25 minutes. The closest station is Piramide on the B metro line.

Despite having spent a lot of time in Testaccio over the past two decades, I realised that there is still so much of it I never experienced. Thanks to Devour Rome, I discovered amazing bars, market stalls and restaurants I never even knew existed!

A few years ago I attended the Devour’s Tapas Tour of Madrid, which to this day remains one of the most fun guided tours I’ve ever done in my life.

And so, when I found out that Devour had launched tours in my hometown, I reached out to them and asked if I could join one for a review.

The tour started at 10am and ended around 2pm, so we had 4 hours of eating and drinking at Testaccio’s best and most authentic eateries. Our guide was the wonderful Abbie Stark, an American living in Rome, she is knowledgeable and passionate about Italy and its food. Abbie is great fun and her passion is infectious!

One of the great things about Devour Tours is that they support family-run businesses and unique cultural icons. Meet the proud people behind your food, hear fascinating stories, and experience age-old traditions on our insider experiences!

Abbie introduced us to her favourite food traders in Testaccio and the best places to eat and drink. We learnt about local, seasonal ingredients and recipes. Naturally, being from Rome, I knew most of this stuff already but it was all new to the other people on the tour. It was amazing to see them falling in love with Roman cuisine more and more as the hours passed! 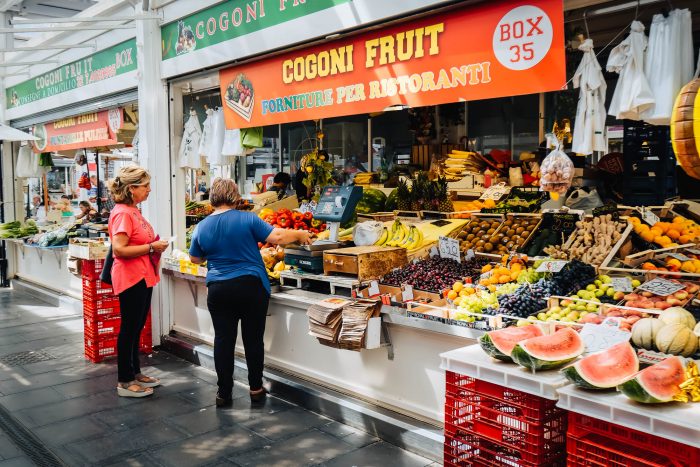 I won’t go into too much detail about all the stops we did, because I don’t want to spoil the surprise to any of you planning to join the tour. What I can tell you is that on Devour Rome Testaccio tour you will get to taste my hometown’s most iconic dishes!

You will start the tour with a colazione al bar con cornetto e caffè (breakfast at the cafè with croissant and coffee)!

And then taste some of the best “pizza al taglio” (pizza sold by weight) in Rome! You can buy this pizza at a stand inside Mercato di Testaccio. The dough is soft and pillowy, after it’s left to rise for 72 hours! But what really sets this pizza apart from the rest are the toppings! Peach and lard; courgette blossoms with burrata and anchovies; slow cooked cherry tomatoes with pecorino… I can’t wait to be back in Rome to eat it again!

The historic market was moved from an open square to its current location in 2015. The modern structure was conceived along the lines of Roman outdoor markets, so it’s open on all four sides, but also covered and protected by sun and rain.

The mercato di Testaccio is open from Monday to Saturday (7am to 3:30pm). It is a popular destination for produce shopping and for quick and cheap eats during the week.

Of course, no food tour of Rome would be complete without a taste of Roman classic pasta dishes such as carbonara, amatriciana and cacio e pepe!

The pasta dishes we tasted at La Fraschetta di Mastro Giorgio were incredible and some of the best I’ve ever had, particularly the carbonara and the amatriciana. Although, if you love amatriciana, there’s another restaurant nearby in Testaccio which takes the top spot. I am talking about Da Bucatino, of course!

During the food tour with Devour, you will also get a taste of Roman wines! I love of white wine from Frascati, a small town in the hills outside Rome, in an area known as Castelli Romani (the so-called Roman Castles).

We stopped at a local fraschetta, a small bar serving their own wine made in the family’s 100-year-old vineyard. You can buy wine by the glass and get bottles at great prices. La Fraschetta da Sandro is one of the oldest establishments in the neighbourhood and this visit was the highlight of the tour for me!

During the tour, you will learn about Italy’s top cheeses, charcuterie and what makes Italian balsamic vinegar unique.

Salumeria Volpetti is an institution in Rome, with people travelling from all over the city to buy products here. They also vacuum seal and ship products anywhere in the world at very reasonable prices.

Our last stop was for gelato, something you can’t miss when visiting Italy. I particularly love gelato in Rome because there whipped cream on gelato is always free! And is ALWAYS delicious! So, when they ask you if you want your gelato con panna, say yes!

I hope you enjoyed reading this post about one of my favourite neighbourhoods! If you are going to Rome, please do spend a few hours in Testaccio to get a glimpse of Roman life outside of the tourists spots!

What better way to explore the neighbourhood with Devour Food Tours. You will experience the best of Roman cuisine…just like a local!

Disclaimer: my husband and I received complimentary tour tickets. All my opinions are my own.

How To Spend a Long Weekend in Ghent, Belgium

[…] with wonderful architecture and art, rich history, friendly and open people. And of course, Roman food is just amazing let’s not forget that! Imagine eating the delicious pastas, pizzas, pastries, […]

Rome: My Ultimate Guide for Eating Out in the Italian Capital | Mondomulia

[…] I highly recommend Casa Manco in Testaccio Market or in Trastevere. I discovered them while on a food tour of Testaccio neighbourhood led by Devour Rome, which is a fantastic way to learn more about Roman […]

Let me begin this post with an apology. This is a summer recipe and I swear I meant to share...