I have a very special post for you today, for two reasons: first, the Diamond Jubilee celebrations are about to start and I decided to get into the spirit with Union Jacks cupcake cases and hand-crafted white/blue/red bunting! The recipe I have chosen is also a British classic: the sticky toffee pudding, but with my own twist!

The other reason to celebrate is that I am through to the next round of the Lavazza Coffee Set Match Bloggers Challenge! Expect more coffee-based recipes in the next few weeks! 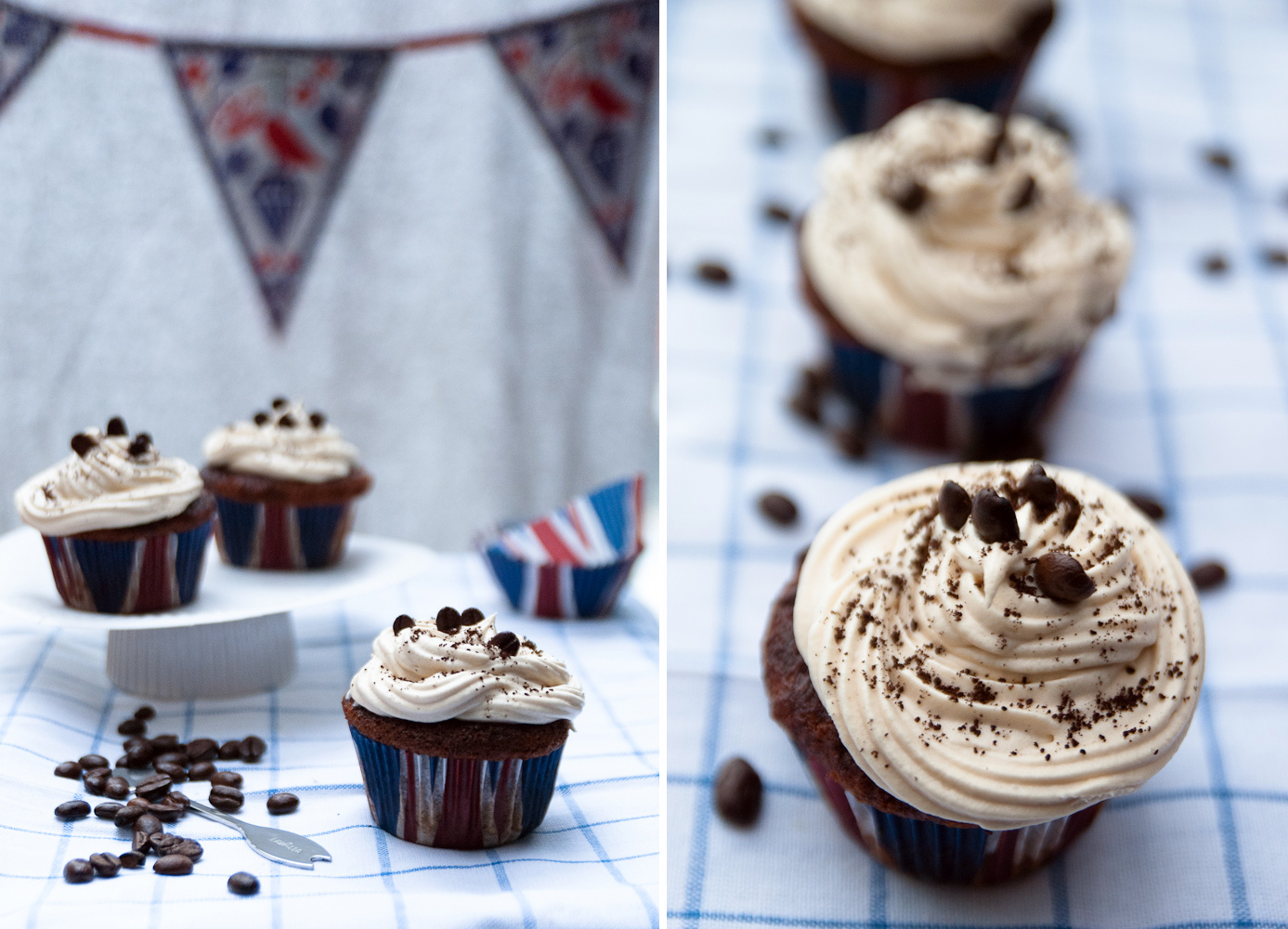 – The story behind this recipe –

When I started the Lavazza competition, the first place I looked for coffee recipes was my favourite food blog Smitten Kitchen. I found a recipe for Coffee Toffee and immediately loved the name! Though the recipe didn’t appeal to me much, but a few days later while eating a Sticky Toffee Pudding at The Fish Club I had the idea of mixing the two desserts together!

I researched different toffee pudding recipes (thank you Peaches and Donuts for sending me one!), but I still was not 100% convinced that a coffee toffee pudding covered in caramel sauce could have enough of a coffee kick.

And then, Kate of The Little Loaf posted a recipe for Sticky Toffee Cupcakes and the idea was born for: Toffee Coffee Cupcakes with Espresso Frosting! 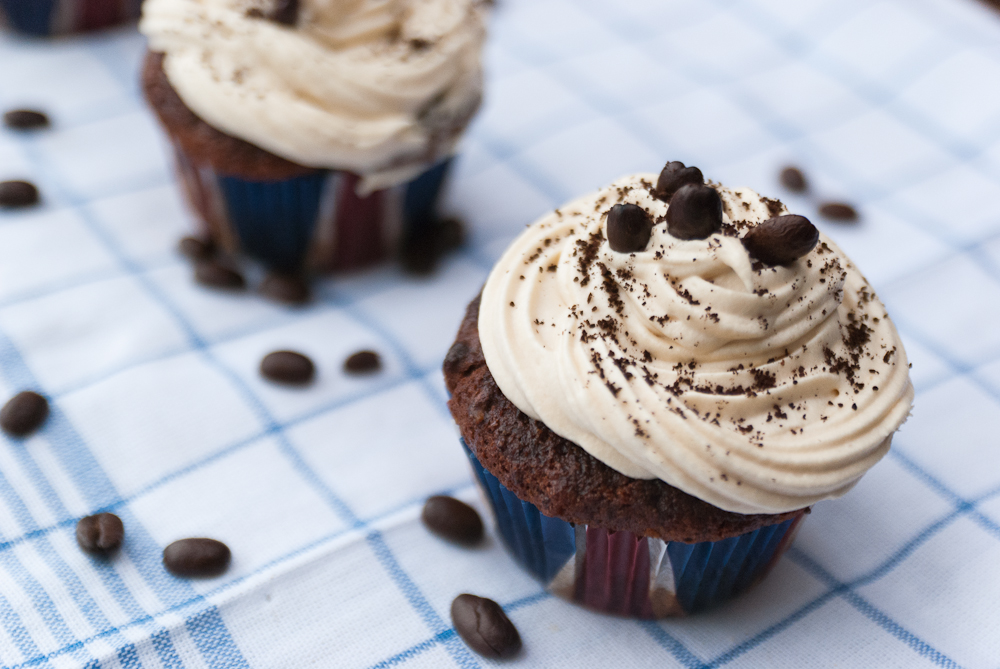 As I was completely new to this recipe, I asked Kate for ideas on how to incorporate coffee in the ingredients and she suggested to soak the dates in coffee, instead of water. I also decided not to have a caramel filling and to make an espresso flavoured frosting instead of the caramel one of the original recipe. Finally, I halved the doses to make 12 cupcakes, instead of 24.

The result was outstanding! I am honestly blown away by how good these cupcakes taste! There were so many chances of getting it wrong as the recipe involves multiples bowls and several stages and hours of work. I did actually mess up with the doses of vanilla essence and bicarbonate of soda, a I used a tablespoon instead of a teaspoon, but luckily the cupcakes were not affected by my mistake! ;)

For the cakes
Remove the pit from the dates and chop them roughly, place them in a bowl and pour over the hot coffee. Leave to soak for 20 minutes until the coffee is fully absorbed, then add the vanilla extract.

Cream the butter and sugar in a mixing bowl until light and fluffy. Sift the flour and bicarbonate of soda into a separate bowl and set aside.

Whisk the eggs lightly in a bowl and

slowly combine with the butter and sugar mixture.

Once all the egg is incorporated, fold in the remaining flour followed by the soaked dates and chopped walnuts. Stir until the batter is just combined then divide between the cupcake cases (filling only 2/3 of the paper cups).

Bake for 15′ until the tops are golden brown and remove from the oven.

For the sugar syrup
Bring the sugar and water to the boil in a small pan, then simmer until all the sugar crystals have dissolved.

When the cakes are out of the oven and still warm, brush the sugar syrup over the tops. Leave the cupcakes to cool down for at least one hour before adding the frosting.

Add the cream cheese to the butter and sugar mixture a little at a time until combined. Slowly add the coffee – you can play with the quantities here, depending on your preferences on taste and colour. Beat until combined, then chill until set.

To frost the cupcakes, fill a piping bag fitted with a round nozzle and pipe a swirl of frosting on each cupcake. Decorate with coffee beans or by sprinkling ground coffee over the frosting.

Store them in the fridge and serve them at room temperature.

To be in with a chance to win one the fantastic Lavazza Wimbledon prizes look out for promotional cups on take away Lavazza coffees, or enter online at Lavazza Coffee Set Match. Prizes include six pairs of tickets to Wimbledon, 90 Lavazza A Modo Mio Favola Plus Wimbledon Limited Edition coffee machines and 500 sets of four exclusive espresso cups created especially for the tournament.

Relocating tips: how to choose a new country to live in

5 Tips And Tricks To Help You Avoid Getting Lost Abroad

Bedroom on the Car Roof: Travelling to the Farthest Corners of the World

Everything You Need to Know Before Travelling the World

The day restaurants and bars reopened after 7 long

GRATEFUL. So INCREDIBLY grateful to have received

Happy Sunday! Less than a week until cafés and re

What is the first place you will visit after you a

After months of postponing, the day finally arrived for me to try the most famous American-style BBQ joint in London,...